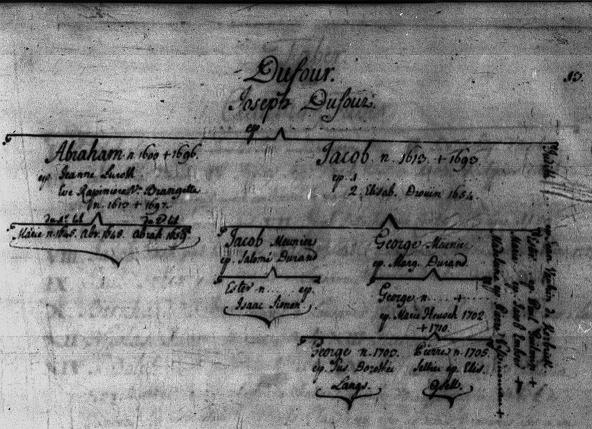 The origins of the Bockoven family of Morris County, New Jersey, have recently been discovered in Bischwiller, Bas-Rhin, France. The crucial development that led to this discovery was the transcription for the International Genealogical Index of the records of the three protestant congregations that met in the old Catholic church in Bischwiller, beginning in the middle of the 17th Century. There was a French-speaking Calvinist congregation, a German-speaking "Evangelical Reformed" congregation favored especially by German-speaking immigrants from Switzerland, and a German-speaking Lutheran congregation. In these records, we found the spelling Bachoffen, and we found the baptism that matched that of our immigrant ancestor. Other researchers have identified many other citizens of Bischwiller who settled in the American Colonies in the mid-18th Century, including Christian Gutknecht and Maria Magdalena Gr³nholtz, ancestors of U.S. President Barack Obama.

The story of the Protestant congregations of Bischwiller is an interesting one. The three congregations met in shifts, following an agreement with the local Seigneur covering every aspect of their Sunday services. There are a number of other places in Alsace where two congregations shared the same church building, a situation termed "ķglises simultanķes". Bischwiller seems to have been the only place where three different congregations shared the same building. Perhaps not surprisingly, there were many marriages where the bride and groom were from different congregations. The agreement among the churches covered this situation, too. The sons would be raised in the congregation of their father, and the daughters in that of their mother. Here is a transcript of part of the regulations for the churches of Bischwiller, approved in 1686 and 1690.

The minister Jean Franńois Poulet of the French-speaking congregation seems to have been an amateur genealogist. He compiled an extensive dossier of the genealogies of many of the families, especially those in his church (ADBR P4742, the manuscript dated 1753). Among these, I was startled to find a Dufour family in which the given names and the names of the spouses matched my Bachoffen family. The light dawned: Dufour and Bachoffen have precisely the same meaning, in French and German respectively. After reviewing the church records again, I understood that the same people who were called Bachoffen in the German records were frequently called Dufour in the French records. Here is a copy of the Dufour family tree from the Poulet manuscript.

Catherine Minck helped me locate copies of several documents that mention this Dufour/Bachoffen family. The evidence supports some of the details of Poulet's version of the Dufour family that were not found in the church records. Among these documents are several dealing with the "last wishes" of Abraham Bachoffen/Dufour. The script is most often a sort of indistinct scrawl that is extremely difficult to read, but it appears Abraham had no children of his own and wanted to provide for his Bachoffen relatives as well as the step-children from his wife's first marriage. He changed his wishes over a period of about 10 years as the circumstances of his family changed. The changes he made in 1691 include a mention of several relatives and also the word Lothringen (Lorraine), but exactly what he was trying to say about his relatives and about his origins is still in doubt. The passage in question appears to refer to "his property located in Lorraine".

Other secondary sources indicate that Abraham and his siblings, children of a Joseph Bachoffen or Dufour, came from the region of Westrich, not far from Metz in the heart of the old duchy of Lorraine. This is something of a surprise, because we had assumed that our Bachoffen family would probably connect with the Bachoffens in the area around Basel, Switzerland. With Swiss origins, it would make perfect sense that they would celebrate most of their family events in the "Evangelical Reformed" congregation rather than in the Lutheran or Calvinist congregations. It is certainly possible that a Bachoffen family could have moved from Switzerland into Lorraine in the early 17th Century, but it is also possible that they were originally a French-speaking Dufour family that gradually adopted the German language and a German surname during their wanderings. Unfortunately, almost no church records from the early 17th Century have survived in Lorraine, a result of the numerous wars that afflicted this region.

The documents that have been discovered are from the registers or Protocolls of the Chancelry of Bischwiller, now at the Archives Dķpartementales du Bas-Rhin (ADBR) in Strasbourg, France, in a box labeled 6E5.2/166. We are still trying to establish the definitive text of some of these documents. We would be grateful for your help with this problem!

At least one of the siblings of Abraham worked as a miller at Olwisheim before coming to Bischwiller. Unfortunately, there do not seem to be many records for Olwisheim. Later, at Bischwiller, members of this family worked at the "K³belm³hl", a mill near Marienthal whose name has not yet been explained.

The earliest mention of Abraham's brother Jacob Bachoffen in the records of Bischwiller that we have found so far is in a memorial dated 04 mar 1662 relating to an inheritance that had come to his wife from her step-mother, the widow of Jean Drouin. The authorities in Bischwiller proposed to tax the inheritance, and Jacob's seigneur at Olwisheim reminded them that agreements existed exempting his subjects from such taxes.