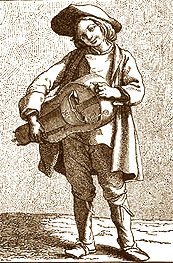 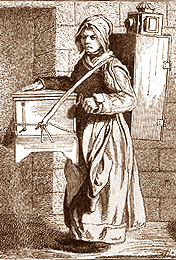 First, the "Mxnxstrxndxsx" in the title is the way Couperin rendered the name, which he here feigns to consider unspeakable and unprintable, of the Parisian guild of minstrels, the Confrťrie de St. Julien-des-Mťnťtriers. In Couperin's time, there was a running controversy over the authority of the minstrelsy and the musicians of the royal court and the churches. He depicts his view of the guild in a delightful little suite, a drama in five acts. His titles and notations in the score tell the tale. Click on the titles to download the MIDI files, scored for the  Hpschd  soundfont.

Couperin uses many clever devices to depict the action. The airs for hurdy-gurdy are of course easy to represent on the harpsichord. At the time, the hurdy-gurdy was considered a peasant's instrument, though a bit later, it became fashionable among the aristocratic ladies of the court of Louis XV. Abbť Carbasus, a teacher of the hurdy-gurdy, wrote in a letter about the fashion of musical instruments (1739), "If Madame will glance at all the musical instruments, she will find none perfect except the hurdy-gurdy." In Couperin's time, they were not so highly regarded!

We should also mention the "confusion" of the fifth act, which is manifested in the melody itself. The natural rhythmic accents are displaced by one sixteenth note for the first four measures, then the accents return to their normal position for the next four measures. In the second half of this "act", the lame can be spotted in the bass line, hurrying away with their crutches. From the comic portrayal, it is clear Couperin did not consider the minstrels to be serious musicians; evidently they were better suited for a carnival.

The minstrelsy in question, the Confrťrie de St. Julien-des-Mťnťtriers, certainly was venerable—it was founded in 1321, and dominated public musical life in Paris right up to the Revolution of 1789. It claimed control of essentially all public instrumental music, specifically "dancing masters and players of instruments both high and low and the oboes" of Paris. In 1660, the dancing masters declared their independence from the Confrťrie, and in 1661 established their own Acadťmie Royale de Danse. Late in the 17th Century, the Confrťrie tried to bring "composers, organists, and masters of the harpsichord" into their syndicate. But the composers, organists, and harpsichord masters in question (many of them falling into all three categories simultaneously) already had successful musical careers in the churches and the royal court. They had no desire to be associated with street musicians. The matter was finally resolved when the composers, organists, and harpsichord masters LebŤgue, Nivers, Buterne, and FranÁois Couperin obtained Letters Patent, with royal approval, on June 25, 1707, voiding the claim of jurisdiction of the Confrťrie. We may imagine that Couperin might have composed his little music drama to celebrate the victory.